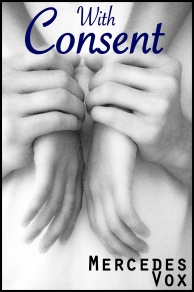 With Consent is a full-length, 98,400-word, stand-alone romance novel with an unambiguous happily-ever-after ending. All sexual acts depicted in this book are clearly and explicitly consensual.

You need this, Jacqueline. You want this, so take the leap. For once in your life, do something daring and dangerous. Playing it safe has gotten you nothing except a dead husband and an empty bed.

At twenty-five years of age, Jackie Blair appears to have it all. Born to wealthy parents, she’s married to her high school sweetheart and living in her dream home in the upscale Greater Boston town of Brookline. As a newly minted private-practice attorney specializing in family law, Jackie is no stranger to how quickly a seemingly perfect life can crumble. While her marriage is comfortable, it lacks passion, and her blossoming career is her current priority. But after her young husband dies in a tragic accident, Jackie buckles down to piece her life back together and, in the process, discovers her spouse had long been harboring a naughty secret.

As Jackie follows clues in pursuit of the truth surrounding her deceased husband’s clandestine activities, she meets rough-around-the-edges Cassidy Booker, a mechanic who owns and operates a car restoration business in the nearby neighborhood of Jamaica Plain.

Underneath Cassidy’s gruff exterior lies an intensely private person, a borderline recluse with a Southern genteelness Jackie finds charming and compelling. She invites him to her home to discuss her dead husband’s double life. During the course of their conversation, Cassidy confides in her regarding his own dark desires: engaging in role-play scenarios featuring captivity and force, a shame he has lived with for all his adult life. The revelation shocks her and they part ways, but bad luck puts Jackie in a dangerous predicament where Cassidy is best suited to render aid.

In the aftermath of that terrifying situation, Jackie decides Cassidy’s virtues outweigh his vices, and she consents to become a willing victim to his darkest fantasies.