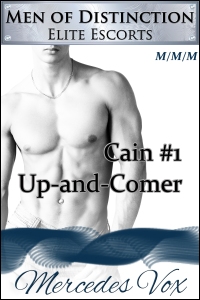 A resident of Buzzards Bay, Massachusetts, Cain is a 25-year-old gay man, a former member of an outlaw motorcycle club called the Yankee Devils. Despite giving up the life, he still tithes to the club so he can keep his tattoos. Employed by Amity Proctor as an escort for Men of Distinction, Cain specializes in clients desiring rough trade, and those tattoos make him money.

Drew Camden is a college student between semesters, the son of a famous television evangelist. He wants to experience the illicit company of not one but two escorts, and Amity’s compound is practically in his parents’ backyard.

For some sinfully hot summertime fun on Cape Cod, can we hear an amen?

Male sex-worker. Prostitute. Rent boy. Whore. Then there are the somewhat evasive but more sophisticated terms, such as companion and consort. Some clients prefer the intrigue of courtly European euphemisms: the Italian cicisbeo, the French chevalier servant, the Spanish cortejo.

Escort service owner Amity Proctor doesn’t care which moniker a client slaps on the world’s oldest profession. As long as the wire transfer clears her corporate bank account before her boys arrive at an appointed location, it’s all good. The customer is always right.

Men of Distinction is a series of short stories, novelettes, and novellas featuring an elite group of straight, gay, and bisexual male escorts. Each Men of Distinction story is clearly marked regarding the sex of the featured escort(s) and client(s). There will be multiple stories featuring each escort, which are best enjoyed in the order indicated in the title.